*** Read this nice article about BoxingFun ***

"Why boxing change your life (especially when you are a woman)"

Volkskrant Magazine februari 2018. By journalist Nienke van Leverink, teacher of vocational school and author of the book QUEER,
bundle with forty-four LGBT highlights from the post-war literature of the Netherlands and Flanders. Photo©Eva Roefs. 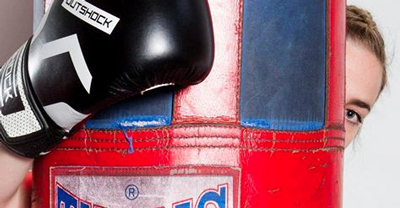 'As a teenager I played tennis for a few years, but it was really hard for me to cycle to the tennis club every week.
So far my sports career.'


Journalist Nienke van Leverink (30) was never really into sports.
Until she started boxing and after some time discovered big bumps on her upper arms.
Muscles ??

I'm bone idle, I'd rather take the elevator than the stairs and I'm allergic to cycling. When I was a toddler, I took ballet lessons, until a disappointing performance in theater De Speeldoos in Zaandam made an end to my dancing ambitions. As a teenager I played tennis for a couple of years, but it was really hard for me to cycle to the tennis club every week. So far for my sport career.
But with 30 approaching, I suddenly feel the urge to pick up a sport of some sorts. Everything to keep fast approaching death at bay. I do not remember what made me choose boxing, I probably instagrammed too much. In Amsterdam, I find a boxing school for women: BoxingFun. Sounds good.
At the next family gathering, my brothers can't stop laughing. "You, boxing classes?", they roar with laughter. "With these twigs?" They squeeze my upper arms until I start to scream and my mother says absent-minded: "Hey, guys, stop hurting her," as she has always done these past thirty years.

Macho
Boxing is about technology and tactics, not so much about strength.
The Tuesday class of BoxingFun takes place at the American Fitness gym in the Blasiusstraat in Amsterdam.
The floor of the room consists of a large mat and in the mirror, which covers the entire wall, I can watch my movements. The other women wear colored wraps around their hands and wrists, and have their own gloves. The first few lessons, I can borrow a pair from Harriet, the boxing teacher. Wearing boxing gloves feels cool, a bit macho, but I like that. I don't get a chance to be tough very often. We start with a warming-up. Jumping jacks, practicing combinations in front of the mirror, at high speed. I feel like my lungs might never recover again and the real lesson hasn't even started yet.
Harriet is supple and fast, with curly hair and tinkling jewels, like an elegant hippie. She could also have been a yoga teacher. She is the opposite of me: she comes from a sports-loving family and has always done all sorts of sports, including kickboxing. As an adult, she first focused on tae-bo and then on boxing. She soon realized she loved sparring the least: "I do not have that ringtiger in me." It's the training that she likes. Nowadays she only gives boxing lessons to women.
It is hard to imagine with all the Dutch female boxers at the world top, but when Harriet founded BoxingFun in 2002, she was the only female boxing teacher in Amsterdam and also the only one who gave boxing lessons to women exclusively. Before that, female boxers did train with other women, but also with men.
"Boxing classes often disregard the fact that female bodies are different," she says. "I wanted to add nuances in my classes. I think it's cool when women start realizing that their bodies can do a lot more than they thought.
It has never been a problem for me to box with men, but I saw that there were women who'd rather learn boxing with other women, in a safe and relaxed environment, before they dared to box with men. There are several reasons why women come to my lessons: they have had a bad experience on a night out, or their relationship has ended, or they love sports and want to master the art of boxing. So many women, so many reasons."
As far as the sport is concerned, she sees no difference between men and women.
"Boxing is about technique and tactics, not so much about strength. However, I see, in general terms, a difference in mentality. Men come in and rely on their strength. They think: I am strong, so I can box.
Women think: I have to learn it. They understand that there's more to gain with technique." 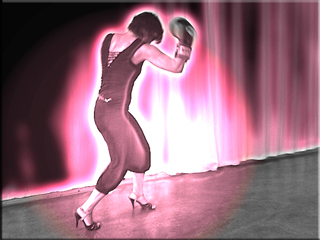 Eating chicken
'Boxing is about technique and tactics, not so much about strength.'
My non-athleticism is clearly getting the best of me. I have difficulty coordinating several limbs at the same time, my upper body appears to be completely stiff and stark and I regularly hit myself in the face. After several lessons, the beginners begin to look like experienced boxers while I remain a beginner.
"I feel like I'm just going backwards," I complain to Harriet. She is honest, but not cruel. For a moment she says nothing, while I see her think about a fitting compliment.
'But you are pretty as a picture and that is also worth something', she says and gives me a hug. "Think about in what kind of condition you came here in the beginning and now look at you!"
That's the kind of teacher she is. She motivates everyone in her own way. She buys maternity gifts for the young mothers in my class. A pupil who has just started boxing again after an injury she gives back her tuition. She is as zen as a lotus flower. But I do not know what she's to do with me.
According to my boyfriend, I should eat chicken after every training session. I do not listen to his explanation, but I love chicken, so I do as he says. A few weeks after the start of my new regime, I stroke my upper arm and I'm shocked. What is that I'm feeling? Is it a tumor? An encapsulated twin sister who I never knew existed?
It turns out to be my triceps, which I have grown myself. As proud as a peacock I let everyone feel - careful! - and even try to impress my brothers with it. They roar with laughter and put me in a hold while I scream: "Not like that! You have to give a left jab and then I come back with a right one!". My mother urges them not to hurt me. 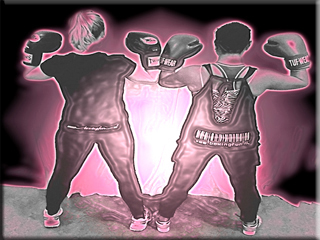 Fitness
The Muscle motivates me to go on. I treat myself to boxing gloves and hand wraps. For the first time in my live, I've experienced that you can change your body by doing sports. A completely new insight. Not that it helps me improve though. It takes months before I feel like I can keep up. But still, I often forget to pull my hands back to my head or my lower body stays still.
Yet I can suddenly lift heavy objects. And without noticing, I became fitter. When I go to a Zumba trial lesson with a friend, I'm completely bored. Why is there a break every three minutes? Why don't we move faster? This new fanaticism amazes me.
When, at the end of the boxing class, the teacher yells, "forty straights, forty hooks, forty uppercuts, moving," I do not throw the towel, but I try to go faster and harder.
This is weird.

Pissed off
Boxing is actually done with your feet. The feet determine the tempo, the speed and the distance. Boxing is actually a mental game. It requires a lot of concentration to improve yourself.
For a stubborn person like me, it is ideal to take on the struggle with myself. 'Boxing has to sink in,' says Harriet. "It starts in your head. Then you have to learn how to use your entire body, up to your feet. You actually do boxing with your feet. The feet determine the tempo, the speed and the distance."
My environment thinks boxing is interesting, especially the men. When they see my boxing gloves, they all have to try them on and punch each other.
"Don't think you can beat a drunken, aggressive guy now," Harriet warns. "What I am trying to teach you is to become aware of your reach. That you know you can do what's needed when you walk down the street. But if someone comes up to you, wildly flailing around, you should just as well get out of there. That has nothing to do with boxing anymore."
I have been boxing for almost two years now. Every Tuesday I dread it, and that will never change for me, but I go anyway, concentrate, punch until I'm blue in the face and afterwards I eat chicken. Why? First of all, I'm eager to take on the challenge to perfect my technique.
There are women who have been boxing with Harriet for ages and say they are still learning things. The focus is similar to that of yoga. After an hour of boxing your head is empty.
What finally attracts me is that it is the only place where it does not matter that I am a woman. You can hit as hard as you like, you do not have to look attractive or apologize.
Boxing is not for decent girls. It is standing apart with your legs, lowering yourself a bit and delivering punches with everything you have.
''Get really angry,'' is sometimes said. If you're sweating, blue in the face  and completely trashed, it was a good class.
I feel stronger knowing that I can do this.

*at BoxingFun I use my entire body, up to my feet*